Putting Interventions to the Test: A Comparison of Five Techniques to Reduce Partisan Hostility

The growing hostility between liberals and conservatives in the United States is a known problem to many.  However, what to do about it is much less clear.  Various groups, such as the Asteroids Club and the Village Square, have developed their own techniques for promoting civility between the opposing parties.    What my collaborators Matt Motyl, Brian Nosek, Jon Haidt, and I wanted to know was: which strategy is the most effective at reducing partisan hostility?  The following describes the result of our attempt to throw the proverbial “kitchen sink” at this problem, testing the effectiveness of several techniques in one study.  The five interventions we tested come from a collection of active civility groups, past social psychological research, and our own intuitions.

Liberals and conservatives completed our study online, being exposed to one (or none) of our five interventions before completing measures of political attitudes and hostility.  The interventions consisted of:

Self Affirmation– Past social psychological work has demonstrated that being reassured of one’s valued traits leads to less defensive and biased processing of opposing viewpoints. Participants in this condition spent a few minutes writing about a valued personal characteristic and a time that they embodied that trait.

Learning Political Membership Last– People readily form impressions of others, and can be motivated to maintain their opinions in order to remain consistent in their evaluations.  This intervention attempted to leverage this motivation by having participants read about a very positive group of individuals, only to later learn that they had volunteered for the opposing political party.

Observing Civility– People often learn by observing the behaviors of others.  For this intervention, participants watched a video describing the relationship between Republican Ronald Reagan and Democrat Tip O’Neill.  The video described the two as having a very friendly and respectful relationship, even when the two did not see eye to eye.

Superordinate Threat– Having a common threat can bring groups together.  To create this common threat, we had participants read an article describing the threat of cyber warfare attacks on the United States.  The article concluded by stating that bipartisan efforts had the potential to eliminate this threat.

Reducing Zero Sum Perceptions– Much of current political gridlock stems from a perception of legislation as a zero sum game (any win for the other side is automatically a loss for my side).  This final intervention sought to weaken this perception by describing the consequences of this mentality and the ways it is inhibiting progress.  The article concluded by stating that shedding this mindset in favor of increased compromise could help both sides achieve their goals.

After the intervention phase, participants completed a measure of partisan hostility, indicated their explicit liking of Republicans and Democrats, and completed an implicit measure of political attitudes (the Implicit Association Test), which measured the participants’ nonconscious attitudes toward the two groups.  The goal of these interventions was to reduce hostility, not necessarily make participants like the other side more.  As such, we were most interested in seeing whether each of the interventions reduced hostility relative to the group that received no intervention (Control).  The results are displayed below: 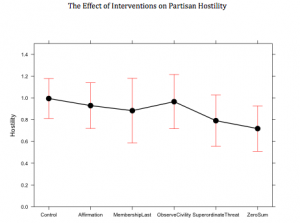 Each dot represents the average hostility score for participants in a given condition (with the red bars marking a 95% confidence interval around that value).  Higher hostility scores are indicative of greater hostility.  These results show that each intervention produced the desired effect, that being lower hostility, but the degree to which they were effective varied.  Reducing Zero Sum Perceptions was the most effective intervention at reducing hostility, closely followed by Superordinate Threat (although Reducing Zero Sum Perceptions was the only intervention to approach statistical significance, p = .052).  Of note, none of the interventions reduced implicit or explicit liking for one’s own party relative to the other party.  In fact, most interventions increased partisan preferences relative to the control condition.  This demonstrates that promoting civility need not reduce an individual’s liking for his or her own group.  Rather, hostility can be specifically targeted and reduced without changing these attitudes.

The results of our intervention contest suggest that there are multiple paths to reducing partisan hostility.  However, not all strategies are equally effective.  Interestingly, the intervention that produced the best results (Reducing Zero Sum Perceptions) was the least based on past psychological research.  As such, when trying to reduce the hostility in the current political environment, I advise paying attention to the nuances of the current sources of hostility.  As time goes by, the issues that divide us change.  Our attempts to bridge those gaps should adapt with them.

To learn more about the interventions we used, see this document: Civil Politics Contest Study-Materials

To learn more about the study in general, see this project’s page on the Open Science Framework