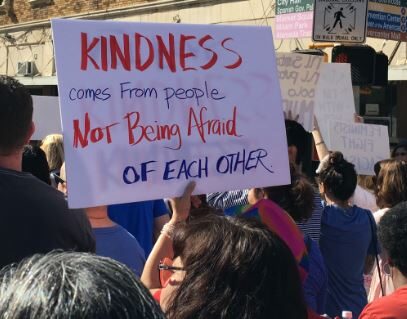 By: ravi No Comments In: News Commentary Tags: immigration, refugees

Without wading into the wisdom of current immigration policy, I wanted to point out a relatively obvious pattern of group dynamics that we see everyday, yet somehow often fail to appreciate – our ability to band together in the face of adversity.  It’s one of the prime ways that humans have evolved to take over the planet in cooperating groups of millions.  When we see a need in our community, we work together with efficiency that no other species can match.

If you read the news, you may feel like the world is falling apart.  Yet, for every story about partisans bashing each other, I also see a lot of love in the world.  This story in the New York Times, where a local synagogue took the lead in hosting a group of Syrian refugees was the kind of news that wouldn’t be news, except for the recent immigration ban.  It’s the kind of everyday kindness that happens all the time – but that never gets near the attention as the extremely rare terrorist attack.

Some of the volunteers were children or grandchildren of refugees. Their synagogue, Am Shalom (“People of Peace”) in Glencoe, Ill., displays a statue depicting members’ families who perished at the Nazis’ hands. The Syrian family, and the president’s orders, were coming on International Holocaust Remembrance Day, some of the volunteers noted with tears in their eyes. A hundred synagogue members had contributed in some way to helping resettle the Syrians: renting an apartment steps from a playground, assembling a vacuum cleaner, lining up juice boxes in the refrigerator.  Some of the synagogue members had signed on instinctually, so the Syrians would be helped the way their own parents or grandparents had been aided when they arrived in the United States.

Many people are showing solidarity with refugees by going to airports and holding signs of welcome and peace.  The ACLU has raised millions from those who want to protect refugees.  Just over a week ago, millions marched in support of women, many with positively framed signs like the below. 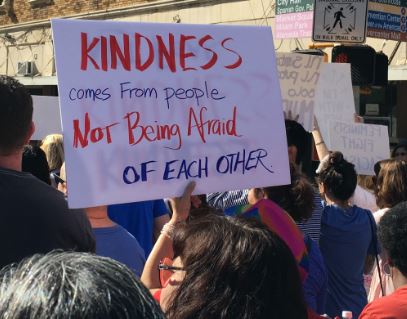 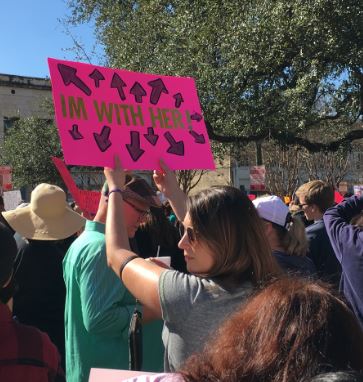 Yes, there remains a lot of division in this country.  But there is also a lot of love.  And while the forces of division get a lot of attention, let’s not forget to pay attention to the millions and millions who demonstrate this love every day, and whose conviction has never been more on display.  Hating the haters only plays into the hands of extremists who thrive on division.  But seeing countless stories of immigrants who risk their lives for our troops, research tuberculosis, and flee attacks on their home to start small businesses can’t help but spur people to positive action.

People learn much better from stories than from statistics and for the longest time, we heard statistics about how we were more likely to be killed by a swimming pool than a terrorist attack by an immigrant, but still saw stories of immigrant terrorists and criminals.  Now we are finally seeing stories of everyday immigrants who want a better life for their children and predictably, people are coming together to help them.  There are a lot of good people in the world.