One of the things that we do at Civil Politics is help organizations conduct program evaluations as part of an effort to understand how the academic research that is largely produced in university settings translates to the real world.   We recently studied an event put on by the Village Square on January 12th entitled Created Equal + Breathing Free, where the ostensibly liberal virtue of diversity was discussed alongside the ostensibly conservative issue of  allowing religious liberty.  The event mirrors ideas from academia that suggest that positive contact between groups can lead to better relationships, especially when the groups collaborate on shared goals (e.g. recognizing a concern that each side brings to the table).

To that end, we asked people who attended the event to agree or disagree with statements about the importance of diversity, the importance of religious liberty, and attitudes toward liberals and conservatives.  We asked the same questions before and after the event, to see if the event changed any attitudes and, as we have found before in such work, we found that people’s attitudes about issues are hard to change, but that people do end up liking people in the opposing group more after the event.  The below graph shows that attitudes toward all groups increased post-event, with the highest increases amongst those who came into the event with pro-liberal attitudes becoming significantly more likely to believe that “conservatives are good people” (see leftmost bar in the below graph). 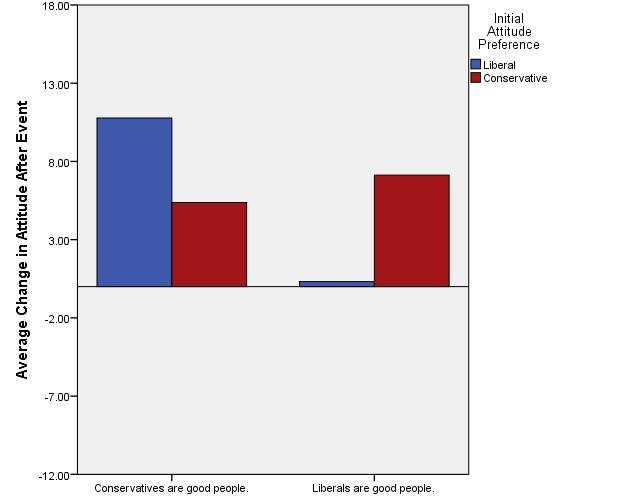 37 people ended up completing both before and after event surveys and there was one statistically significant finding – that people were more likely to agree with the statement “conservatives are good people” after the event, as compared to before the event (+ 7.35 on a 100 point scale, t-test t=2.392, p = .022).  This was driven almost entirely by the 22 people who started the event with more agreement to the idea that liberals are indeed good people, as compared to the idea that conservatives are good people (the increase was 10.8 points amongst this group), suggesting that the main effect of the event was to convince a generally liberal audience that conservatives are indeed good people too.

Note that the event didn’t change anyone’s mind as to the importance of the issues or make either group want to be friends with the other.  The event organizers predicted as much from their experience of the event.  But perhaps the simple belief that those who one disagrees with are indeed good sincere people is a step in the right direction for a single night’s work, and for that, we thank the Village Square and anyone who brings people together in their communities in the spirit of collaboration across groups.  In our experience, change often happens one relationship at a time.

ps.  If you’re interested in the Village Square’s take on these results, you can read more about their philosophy and their experience of the event here.