By: Jonathan Haidt No Comments In: Uncategorized Tags: civility, polarization

I have an essay in today's NYT on America's growing polarization. Marc Hetherington and I show what's happened over the last 50 years, not just in Congress but among citizens, in 3 simple graphs.The first one is below, from McCarty, Poole, and Rosenthal. It shows that things were really polarized in the late 19th century, after the civil war, then they got much less polarized, but it's been a rapid climb upwards since the 1960s. We talk about why. 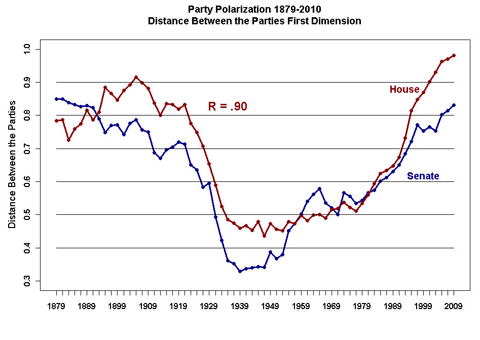 The next 2 graphs were made by Hetherington, and they are just as depressing. Click here to read the essay.

But we end on an optimistic note. There really are so many changes we could make to roll things back, perhaps to the level of polarization in the 1990s, which was much lower than it is today. But only if we push our leaders to make the changes. They will not make the changes themselves, because each change will probably favor one side or the other, so the disadvantaged side will fight like hell. But extreme pressure from outside, for a comprehensive package of reforms — a kind of good-government-Simpson-Bowles — might do it.

———————
Post-script: see Pete Ditto's call for "domestic realpolitik" to be realistic about how we're going to get things done.