When bad things happen, there is a natural psychological tendency to spread blame around.  Consider this piece of psychological research from Joshua Knobe where he shows that when someone causes harm to the environment, they are deemed to be doing so intentionally, whereas when they cause benefit to the environment, they don’t get the same credit.  Unfortunately, we often blame not only people who are directly responsible for a bad event, but members of the “groups” that people involved belong to.

Consider these reactions to recent shootings of both officers in Dallas and civilians by officers.

Fortunately, both of the above reactions are rare and most people realize that it is possible to sympathize with both the police and the minorities who have been killed in recent events.

According to Dallas police, protesters helped capture the shooters. And cops helped shuttle protesters to safety during the attack.

It is possible to understand and sympathize with the anger and frustration of black people AND think it’s wrong to shoot cops.

For those of us seeking to understand people’s reactions to events better, with an eye toward defusing conflict, this paper on “Vicarious Retribution” (full text here) provides a good model, bringing together a variety of research, of how such conflict perpetuates itself and how such conflict can be reduced.  Let me highlight 2 passages from this paper that recommend specific ideas for those who want to intentionally reduce the potential for conflict. 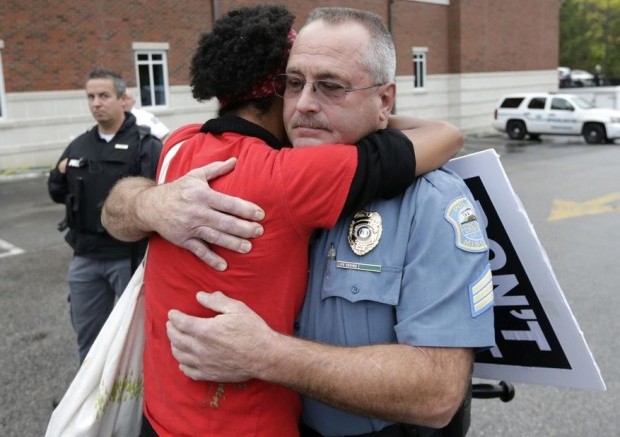 Focus on Feelings of Sympathy for victims:

The final emotion that may be relevant for defusing cycles of retributive aggression is sympathy. Some research suggests that focusing on the harm that has befallen the outgroup (rather than the bad acts of one’s ingroup) elicits feelings of sympathy rather than guilt and that sympathy has a stronger relationship with changing the system of intergroup relations to avoid against future conflict than does guilt (Iyer et al., 2003).

Highlight the individuality of cops and minorities:

As with much of what we have found evidence for in reducing inter-ideological divisions, it often comes down to finding common goals (e.g. sympathizing with the families affected by all of the recent shootings and preventing further tragedy) and building personal relationships with others who we might be tempted to stereotype.  Whether you are more naturally inclined to identify more with minority groups or police officers, the current moment is a time when people on either side of the issue can sympathize with those who have lost their lives recently and work together on our collective desire for a safer, less divided country.