As political events in Europe and America got stranger and more violent over the last year, I found myself thinking of the phrase “things fall apart; the center cannot hold.” I didn’t know its origin so I looked it up, found the poem The Second Coming, by W. B. Yeats, and found a great deal of wisdom. Yeats wrote it in 1919, just after the First World War and at the beginning of the Irish War of Independence.

Here is the first stanza:

Turning and turning in the widening gyre

The falcon cannot hear the falconer;

Mere anarchy is loosed upon the world,

The blood-dimmed tide is loosed, and everywhere

The ceremony of innocence is drowned;

The best lack all conviction, while the worst

Are full of passionate intensity.

The last two lines point to moral psychology—people full of passionate intensity—as one of the reasons why things fall apart and the centre cannot hold. This analysis fits with many books written about the causes of political violence and genocide (see Baumeister; Fiske & Rai; and my book, The Righteous Mind). It also fits my analysis of why things are falling apart on American college campuses.

I therefore used the poem as the leitmotif of a talk I gave last week at the American Psychological Association’s annual convention, in Denver, where I offered my most complete statement ever on the causes and consequences of political polarization. I focused on the causes of America’s political dysfunction and then extended the analysis to Europe as well. Something is going wrong in Western liberal democracies; there is something we’re not understanding.

But as long as I had the opportunity to address the largest gathering of psychologists in the world, I wanted to extend the analysis to psychology too. I showed how we, as a field, have gotten politically polarized, as with so many other academic disciplines, professions, and institutions. We have become part of the problem, and it is damaging our science and our ability to help our clients, patients, and students. I proposed that we must fix ourselves before we can become part of the solution.

Here is the entire talk (54 minutes), including an introduction from Susan McDaniel, the president of APA.

I hope that the talk will be useful in high school and college courses on civics, political science, and social psychology. I am therefore posting the slides, both as a PowerPoint file and as a 12 page PDF file. (I encourage their use by educators at all levels.)

I also hope that the talk will help people to understand our mission here at Heterodox Academy. Polarization and political purification are happening to so many institutions. For institutions that aim to discover truth, such as a university, ideological purification is deadly. Pleasing but false ideas go unchallenged. Unpleasant but true ideas don’t get a hearing. Until we figure out ways to increase viewpoint diversity and to end the intimidation and ostracism experienced by those who question orthodoxy on campus, universities will be part of our national problem, not part of the solution.

Want to Reduce Political Extremism? Ask How Instead of Why

Those who had had to explain how the political policies worked became less confident in their understanding of those policies than did those who had been asked to enumerate reasons for their positions. Further, participants reported more moderate attitudes towards the issues after giving mechanistic explanations, whereas enumerating reasons led to no such change in position extremity.

Participants first provided their position on the six policies. They were then assigned to one of four conditions and asked to elaborate on one of two policies: cap and trade or flat tax. Depending on condition, participants were asked either to generate a mechanistic explanation or to enumerate reasons for their position. Next, participants were told that they would receive a bonus payment (20 cents; equal to 20% of their compensation for completing the experiment) and that they had four options for what they could do with this bonus payment. They could (a) donate it to a group that advocated in favor of the issue in question, (b) donate it to a group that advocated against the issue, (c) keep the money for themselves (after answering a few additional questions), or (d) turn it down.

The researchers tried to reduce political extremity by asking participants to elaborate with causal links. In the reason generation condition, participants were asked to write down all the reasons they have for their position on a policy, going from the most important to the least. In the mechanistic explanation condition, participants were asked to describe all the details they know about a policy, going from the first step to the last, and providing the causal connection between the steps.

3. Who Was Studied- Sample:

Politics is fundamentally a group phenomenon that should be examined in relation to person’s identification with a particular group label (see Allport, 1954). When a person identifies as a “conservative” or “liberal” it means that he or she not only assumes a particular set of political positions but also identifies with other partisans as well as the shared sense of reality implied therein (Devine, 2014; see also Jost, Ledgerwood, & Hardin, 2008). To define oneself in this way often implies the identification of opponents, rivals or even enemies (cf. Edelman, 1988) that, at increasing levels, becomes a means of further clarifying what it means to be a “conservative” or a “liberal.”

“Civility,” which is the concern of this group, should therefore be examined as an intergroup, rather than interpersonal matter. What, then, does research on intergroup relations have to say about increasing civility among political partisans? I would argue that the greatest threat to political civility within a stable democracy is the “moralizing” of political discourse as it pertains to political groups. Namely, it is one thing to view your political opponent as misguided or simply wrong; it is another thing entirely to view him/her and the group that he/she represents as immoral, transgressive, or just plain evil. When placed in the latter realm, political discourse becomes decidedly less civil as the concept of “loyal opposition” becomes not only oxymoronic, but tantamount to treason. 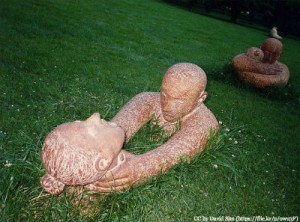 Why must we as social scientists, practitioners, and scholars be wary when political discourse becomes moralized? The simple answer is that morality is powerful. The capacity for moral judgment and moral action may be encoded into our very fiber as a species and may have been the building blocks upon which human civilization was founded (Haidt, 2007, 2012; Greene, 2013). Putting aside the ontology of human morality, a much more parsimonious reason, at least for my purposes, for why morality is powerful is that people tend to view moral values as being objectively true (Goodwin & Darley, 2008). That is, a moral statement (e.g., “It is wrong to kill.”) is perceived to be more like an empirically verifiable fact (e.g., “The Earth revolves around the Sun.”) and less like a statement of social convention (e.g., “An appropriate tip for your server is 15 to 20 percent of the bill.”).

And there’s the rub, so to speak. A person’s morality is rooted in beliefs that are perceived to be as true as the Earth revolves around the Sun and which also imply a proscriptive element: not only is it wrong to kill, but one ought not to kill. A person’s moral worldview not only describes social reality but also guides future behavior as well as how future behavior is to be evaluated. One only needs to consult the work of Linda Skitka on moral conviction (see Skitka, 2010) or Jeremy Ginges’ work on sacred values (e.g., Atran & Ginges, 2012; Ginges & Atran, 2011) to see how these aspects of morality function in politics. What their work demonstrates is that we often judge the actions of others in relation to whether they reflect or confirm our moral values, even if violates considerations of procedural justice (Skitka & Houston, 2001) or our own utilitarian benefit (Ginges & Atran, 2011).

The “moralizing” of intergroup relations is often reflected in the attribution of moral or immoral qualities to other groups. I am currently examining the consequences of this process as part of my dissertation. In my preliminary findings (see Pilecki et al., 2013), I have found that when people perceive that members of another group (e.g., liberals, conservatives, feminists, evangelicals, etc.) as being typically less moral than most other people they are more likely to view violence or acts of political repression towards that group as being appropriate. These findings reinforce previous empirical and theoretical work by Susan Opotow (1990, 1993, 1994) and others (e.g., Bar-Tal, 1990) on the “scope of justice,” which refers to the distinction that people make between those considered worthy of moral treatment and those considered unworthy of moral treatment. When a social group is imbued with immoral qualities by political leaders, pundits, or other “entrepreneurs of identity” (Reicher & Hopkins, 2001) that group is effectively set apart from others and, in effect, becomes a legitimate and morally justifiable target of harm rather than civil discussion.

When people moralize intergroup relations they limit the potential for civil discourse to emerge as they frame political issues within the realm of sacred values, thereby making trade-offs and compromises less likely (Tetlock, 2003; Tetlock, Kristel, Elson, Green & Lerner, 2000). The words and labels we use to describe the social groups with which we identify and those that we oppose shape how we think about us, them and how we relate to one another (see Hammack & Pilecki, 2012). In other words, language matters and it is therefore incumbent for social scientists and practitioners to hold political leaders, media figures and other influential people accountable for their use of moralizing rhetoric to mobilize support, gain more viewers, and/or delegitimize criticism.