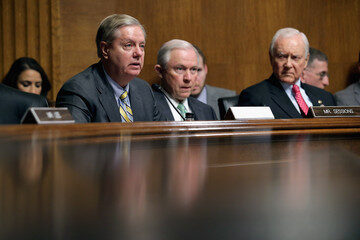 Blue State Republicans as a path towards compromise

Last night, the tossup senate races broke sharply toward the Republican party, which Republicans winning in two states where President Obama won in 2008 and 2012: Iowa and Colorado.  Research shows that one way that conflict can be ameliorated is when the boundaries between competing groups are blurred.  Indeed, if you look at some of the rhetoric from the victors, you can see that there may indeed be the seeds of compromise.

From this Denver station article:

Gardner, who represented a conservative fourth U.S. House district on the state’s eastern plains, courted the political center to win. He highlighted that strategy in his acceptance speech.

“The people of Colorado, voters around this state had their voices heard. They are not red. They are not blue. But they are crystal clear. Crystal clear in their message to Washington, D.C.,: Get your job done and get the heck of out of the way,” he said.

On the other side of the aisle, Red State Democrats like Joe Manchin of West Virginia have led some of the most significant compromises, again by blurring the familiar political lines.  In contrast, those senators who are least eager to compromise often seek to reinforce the differences between groups, exacerbating the partisan divides by seeking a clear contrast.

Mitch McConnell, the new Senate Majority Leader, specifically went out of his way to strike a tone of compromise in his victory speech and talked about the “obligation to work together” with the opposite side toward solutions to our common problems.  Let’s hope that, as research would suggest, a less homogenous Republican Senate caucus (and eventually a less homogenous Democratic Senate caucus) leads to that vision becoming a reality.

We can’t know all the reasons why centrist Democrat Evan Bayh (D-Indiana) decided not to run for re-election, but his recent op-ed essay in the New York Times was a stunning indictment of the incivility and dysfunction of the U.S. Senate:

There are many causes for the dysfunction: strident partisanship, unyielding ideology, a corrosive system of campaign financing, gerrymandering of House districts, endless filibusters, holds on executive appointees in the Senate, dwindling social interaction between senators of opposing parties and a caucus system that promotes party unity at the expense of bipartisan consensus.

In the rest of the essay, Bayh points to two of the main causes that we at CivilPolitics have been discussing. First, the necessity of strengthening interpersonal relationships BEFORE discussing areas of disagreement. As Bayh says:

When I was a boy, members of Congress from both parties, along with their families, would routinely visit our home for dinner or the holidays. This type of social interaction hardly ever happens today and we are the poorer for it. It is much harder to demonize someone when you know his family or have visited his home. Today, members routinely campaign against each other, raise donations against each other and force votes on trivial amendments written solely to provide fodder for the next negative attack ad. It’s difficult to work with members actively plotting your demise. Any improvement must begin by changing the personal chemistry among senators. More interaction in a non-adversarial atmosphere would help.

Second, Bayh advocates a variety of structural and institutional reforms which would change the dynamic among Senators and facilitate cooperation. He specifically mentions campaign finance reform and other ways to allow Senators to spend less time fundraising; and reducing the number of votes needed to overcome a filibuster from 60 to 55 (just as the number was reduced from 67 to 60 in 1975).

So much of the rise in partisan rancor has been due to the “big sort” that began in the 1970s as conservative democrats moved to the Republican party, and as liberal or even moderate Republicans got voted out everywhere but the extreme Northeast and Northwest corners of the country. The two parties are now relatively ideologically pure, which makes party into a more perfectly moral divide. The loss of any of the few remaining centrist politicians is a blow to civility and a loss to the nation.