Perceptions of Civility in America 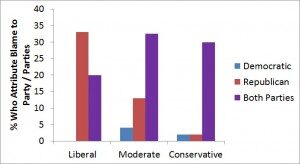 Perceptions of Civility in America

A recent Zogby International poll found that 95% of Americans believe that civility is important for a healthy democracy and that citizens are "turned off" when politics become "rude and nasty." With these alarming numbers, it is no surprise that three out of four Americans believe that, "Right now, Washington is broken." This bipartisan agreement on the incivility afflicting today's politics leads us to two questions:

1) Who is being blamed for this incivility? Our data at YourMorals.org suggest that liberals are, not surprisingly, more likely to blame the Republican Party than moderates or conservatives are. However and possibly more importantly, we see that many liberals, moderates, and conservatives believe both parties are at fault. In other words, people across the political spectrum are willing to admit that people in their own parties are somewhat at fault. To paraphrase T. S. Eliot and allude to the addiction treatment program slogan, let's hope that "acceptance is the first step to recovery." 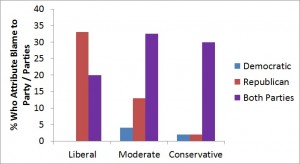 2) What can people do to help bring civility back into American politics? A KRC Research poll demonstrates that 87% of those questioned believe that the general American public is responsible for improving civility. A full 85% of Democrats and Republicans believe that one action they could take to foster more civility is by voting against candidates who are uncivil. Between two-thirds and three-fourths of those surveyed also suggested that they, as consumers, could stop buying products from companies that promote hostile political discussions or display uncivil advertising. These poll numbers showing that people believe they can bring about civility by their own actions are encouraging, but should be taken with a grain of salt. Social psychological research informs us that attitudes are not always very good predictors of people’s behavior. This finding may partially explain the "Bradley Effect," which theorizes that people inaccurately respond to questions in ways that seem more socially desirable, yet still behave in less socially desirable ways. Might people simply be saying they desire civility while stoking the flames of incivility? Let's hope not.